Mortal Kombat in the Far West: The Crossover That Wasn’t 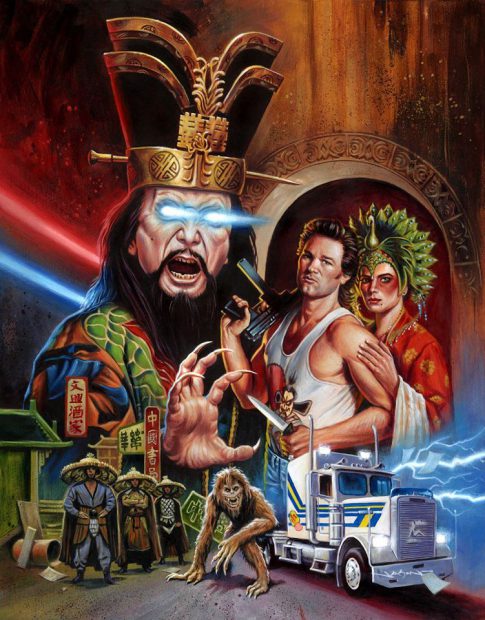 Mortal Kombat in the Far West: The Crossover That Wasn’t

This time I’m going to talk about a fantastic film from the ’80s. Many people confuse it with a sequel of Mortal Kombat, but… Who did copy who? The answer will surprise you. Here we go:

Big Trouble in Chinatown was an film from USA, a mixture of action and comedy released in 1986. John Carpenter was its director, moving away, in this case from the horror genre, and Kurt Russel took the leading role.

Today, they consider it a cult movie, but at the time, it didn’t do very well in theaters. They had to wait until the VHS release to recoup their investment.

Problems with the script

It seems that the original script was very different from what we ended up seeing on the screen. The original writers, Gary Goldman and David Weinstein, thought of mix of a far west movie and Chinese mythology, set in 1880 San Francisco, where the protagonist, Jack Burton, would be a cowboy and not a truck driver, as in the final version. Thus, they presented a first script to 20th Century Fox, who began to ask for changes, some very major, until the writers refused to continue slaughtering their work to make it look good to them.

Apparently, one of the things producers do is get the rights to scripts they don’t like, and then have someone else rewrite them. Thus, they benefit from the ideas of another person and do not have to put them in the credits. Luckily for the original writers, the Writers Guild of America stood up for them. So they got the credits, even though not much of their original idea remained. But… you know… I would like to have seen where that western mixed with oriental fantasy was going to.

The third in the triangle

In any case, WD Richter wrote the final script, transferring the action to contemporary times, but enhancing the fantastic elements (thank goodness) and only kept the story of the villain, Lo Pan, the same. But for the reasons mentioned above, he did not appear in the credits. Carpenter disagreed with that. In fact, Carpenter made his own contributions, for example removing material that could be considered racist.

Normally, in these types of movies, the protagonist is white and his sidekick is someone from a minority. But Carpenter wanted to reverse the roles. Jack Burton thinks he’s the hero of the story, but he’s actually quite clumsy. His friend, Wang Chi, however, is a very competent character and highly skilled in martial arts.

Dress me slowly, I’m in a hurry

The choice of Carpenter was not accidental: the director had a reputation for being able to work quickly. As the production company was afraid that the budget would increase too much, they assigned him the job and only gave him 10 weeks of pre-production.

Due to the complexity of the scenes, John Lloyd had to design artificial sets, since it would have been very difficult to film them on real places. Lew James devised a meticulous plan for the martial arts choreography, which included springboards, cables, backwards movements, downwards movements…

Another thing that caused problems with the budget was the special effects. One of the most difficult was Lo Pan’s spy eyeball: It required multiple puppeteers and wires to control its facial expressions and a specially designed sphere system.

We’ve got a Competitor

As if time and budget issues weren’t enough, Carpenter learned that Eddy Murphy was shooting The Golden Boy: a movie with a very similar plot. Moreover, they were going to release it around the same time. So Carpenter had to rush things even more, to be able to release the film a few months earlier. But anyway, they had the bad luck to release it at the same time as Aliens, the return.

When they released it, it received mixed reviews, but over time they gave it a more positive assessment.

Jack Burton is a swaggering truck driver who makes a living transporting goods to Chinatown in San Francisco.

One day, he wins a few dollars from his friend Wang Chi in Mahjong. In order to pay him the money he owes, Wang needs him to accompany him to the airport to pick up his fiancée, Miao Yin.

Along the way, Wang tells him that his girl has green eyes, which is unusual for a Chinese woman. But upon arriving at the airport, some Chinese gangsters kidnap the girl. The two friends try to rescue her, but then some supernatural beings, known as “Storms”, intervene. Its leader is Lo Pan. He was forever cursed. But he seeks to return to life through the sacrifice of a very special woman: coincidentally, a Chinese woman with green eyes. So, Lo Pan orders his storms to take Miao Yin away.

Shortly after, journalist Gracie Law enters the scene. She’s staying in the same place where Wang Chi and his fiancée, Miao Yin, are taking refuge on their escape from Lo Pan. The Storms appear and kidnap the two women, since Gracie has green eyes too.

Wang Chi convinces Jack to help him search for his uncle Egg Shen, who possesses supernatural powers. Thus, our group of improvised heroes enter the domain of Lo Pan.

Meanwhile. the villain plans to marry both women, as they have passed a magical ritual.

After marrying the two girls, he plans to sacrifice Gracie and keep Miao Yin. The heroes arrive just in time, but must wait until Lo Pan is married, because that will make him vulnerable to their attacks. Will they manage to rescue both damsels in distress? You’ll have to watch it to find out.

They published a comic called Jack Burton. It apparently continues the story. I haven’t read it yet but I plan to do so soon.

In 1986, they published a video game of the same name. Electric Dreams developed it for the ZX Spectrum, Commodore 64, and Amstrad CPC.

And here comes the most amazing fact: I always thought that this movie was a copy of Mortal Kombat, because of the similarity of certain characters with Raiden, Liu Kang and Shang Tsung. But by researching for this article, I discovered that the movie predates the release of Mortal Kombat 1. That would mean that it was probably the movie that inspired the creators of Mortal Kombat. The things that one finds out when looking for information… I love this blog!