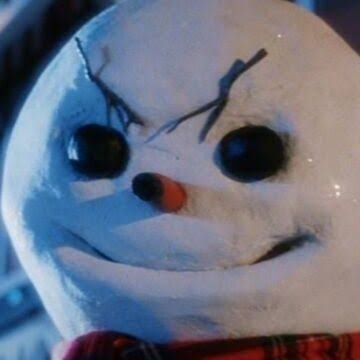 This time, I will talk about a fun Christmas horror comedy: Jack Frost (not to be confused with a Warner movie that has the same name, but is a typical Christmas family comedy).

A narrator with no filter

As soon as the film begins, we hear a conversation between a little girl and her grandfather. The girl wants a bedtime story, and the grandfather has no better idea than to tell her a story about a Christmas monster.

As in the Teenage Mutant Ninja Turtles

It all begins with a prison vehicle, transporting a convict to the place of his execution. The vehicle suffers an accident, involving another vehicle, which was transporting an experimental chemical. An explosion bathes the criminal in the chemical, melting him on the snow. But the chemist not only did that, but also fused his cells with the snow.

Now this serial killer has turned into a living snowman, who can melt and refreeze at will.

The first thing he does is look for the sheriff, who was lucky enough to be in the right place and time to arrest him. You know: A small town sheriff, who could have gone his entire life without making any significant arrests, but became more or less famous for arresting this killer.

But the sheriff was traumatized, because that criminal, basically… threatened… him… the truth is that… it does not look beliebable (especially coming from a policeman: one imagines that these people must already be used to hearing those things), but Hey, who am I to judge someone else’s trauma?

Jack Frost will try to destroy him, but not before destroying his family and wreaking havoc in the small town where he lives.

Another thing that happens in the town is that they are preparing a snowman competition. It sounds promising, at first, but it’s really a wasted narrative resource.

The film includes the classic exaggerated deaths of all horror comedies. It also includes strange characters and dialogues that left me in doubt, if they are bad by accident, or it is done on purpose to make it funnier and more bizarre.

A highlight of the film is that it has several false endings. To the point of making you wonder: Well, when are they going to kill the monster?

The true ending basically, does the same, just to ensure us that there will be a sequel.