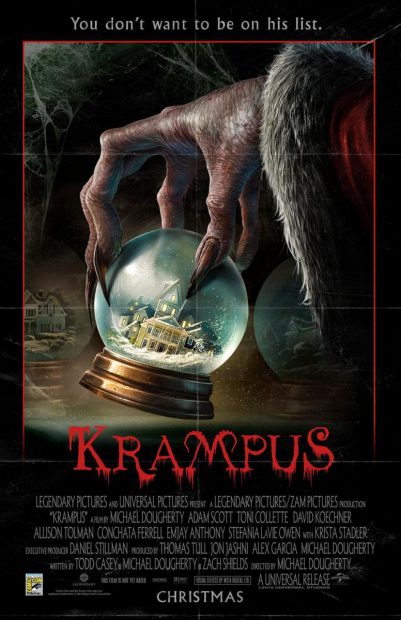 On this occasion I will talk about one of the first film adaptations of a very old character. A Character from German folklore who recently entered pop culture: Krampus, the anti Santa Claus.

We begin with a criticism

As soon as the film begins, a lot of people stampede into a shopping center. They begin to fight like animals for the products: All in slow motion and with a sweet Christmas song playing in the background. This already anticipates us, a little, what the film is about.

In this shopping center, we meet the protagonist: a little boy. He begins to fight with another boy, both of them in a Christmas disguise. A picturesque scene, except that the boy’s parents are not happy at all.

A bit of context

The family returns home with the grandmother, a German immigrant. She is cooking while watching a television adaptation of Christmas ghosts (another omen).

Here we begin to know the family dynamics: A workaholic father, an older sister, who prefers to be at her boyfriend’s house, and a mother who does what she can.

And as if all this weren’t enough, some very annoying relatives visit them for the holidays. To top it all, they happen to bring an old aunt, known for her raw honesty.

During dinner, two cousins ​​steal from the boy, the letter that he had written to Santa. Then they read it aloud. It turns out that the boy had asked many things related to embarrassing family situations. He just wanted Christmas to be the same as before, when he was younger. But he was embarrassed anyway.

The point is that that was the straw that broke the camel’s back: The boy loses his Christmas spirit. He tears up the letter and throws it out the window. Immediately, a snowstorm breaks out and the power goes out.

Other strange things begin to happen too: A snowman, that no one knows where it came from, appears in the backyard of the house. The older sister goes to her boyfriend’s house, with the excuse of finding out whether they have power or not. She is the first to see the beast, jumping between the roofs of the houses. When they go out to look for her, they find everything frozen and desolate… and goat footprints.

Meanwhile, in the courtyard of the house, more and more snowmen appear.

For those who do not know him, Krampus is a kind of demon (with horns, goats’ legs and a generally terrifying appearance). He appears in the first days of December, to punish children who misbehave. Apparently, the boy has invoked him by tearing up his letter to Santa Claus.

But in this adaptation, Krampus is not alone: ​​He has a whole army of evil toys, little living gingerbread men and goblins, who help him terrorize the characters.

A connection to the past.

When it becomes clear that Krampus is behind everything, the grandmother tells them a similar story. It happened when she was a child, in her hometown, back in Europe. The war had caused people to lose their Christmas spirit, and she made the same mistake as her grandson.

Will the characters be able to make amends for their mistakes and survive this dark Christmas or are they all doomed already? You’ll have to watch it to find out.