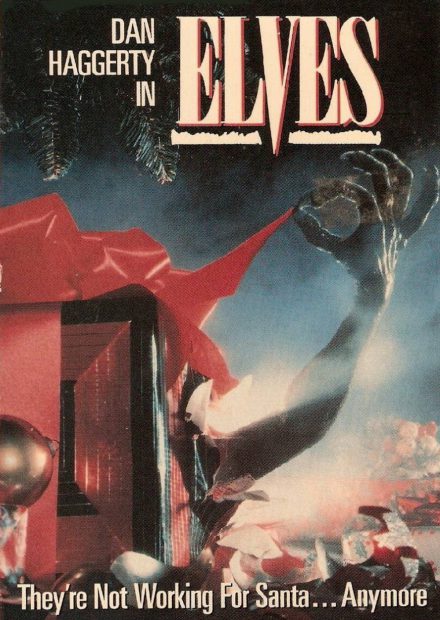 This time I will talk about a Christmas horror movie, that mixes several things and the result is, well, a concoction. The name of the movie is simply “Elves.” Here we go:

Unlike the other movies I discussed this month, this one is really bad. The first point I want to adress, the one thing that definitely kept it from meeting my standards is this: None of the actresses know how to scream. One of them even takes her time, makes some strange movements with her head, to end up letting out a pathetic scream.

The second thing I didn’t like was that it had bad soap opera-style dramatic scenes.

The movie is from the 80s, but the budget is so low that it seems from the 70s. That’s not always bad: Some low-budget movies are good, but this is not the case.

The deaths, on the other hand, are very poorly done. Some of them don’t even make sense.

One thing I did like was the participation of a retired detective, who looks very much like Santa Claus. He is one of the few who acts well.

We also have a very funny scene, where the elf electrocutes a character to death, and the actress plays it as if she was dancing to techno music. That made me laugh. One point in its favor.

It all begins with a girl, who steals a book from her grandfather, performs a ritual in the forest with her friends and accidentally cuts her hand. The blood falls to the ground and revives an evil Christmas elf.

As the story progresses, we learn that the Nazis experimented with elves, with the goal of ​​creating the perfect army. it turns out that the girl is a perfect Aryan princess. The nazis created her to mate with the elf. Oh, and her son would be the antichrist.

The elf is basically a Gollum (but uglier) with very short legs. Oh, and for some reason, he sees everything as if he was drunk. Also, his mouth is open all the time.

By the way, the girl’s grandfather, who is a retired (and repentant) Nazi, has a magic stone, which we don’t quite understand what it does, until the girl decides to use it in a strange way…

In the end, they imply there is going to be a sequel, but in a way that made me wonder when and how, what I’m seeing, actually happened. Either they forgot to explain or they didn’t want an R or X rating for the movie. Anyway, watch it, only if you’re really bored.