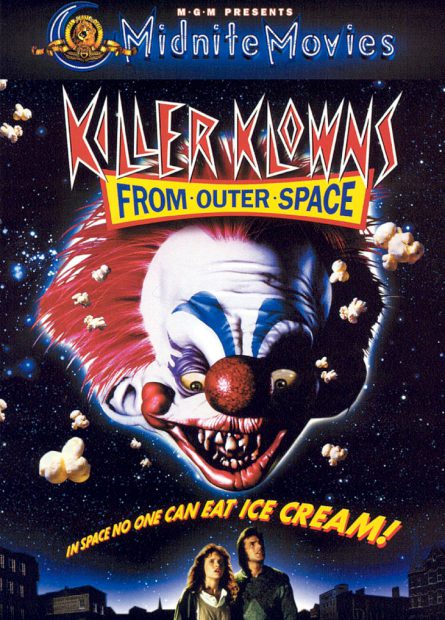 This time I will talk about a funny horror comedy, where clowns play a central role: Killer Klowns from Outer Space.

The film was released in 1988 and was directed by Stephen Chiodo. They filmed it in Watsonville, California and on the Santa Cruz Beach Boardwalk.

They used special effects such as masks, prosthetics and rubber costumes. They even used a machine that could shoot popcorn for real (this will make sense later, I promise). This machine cost seven thousand dollars. It was the most expensive prosthetic in the entire production run and took six weeks to build.

The soundtrack was composed by John Massant. The film’s theme song, “Killer Clowns,” deserves a special mention. The punk rock band, “the Dickies”, was in charge of interpreting it. They included it on their album Killer Klowns from Outer Space in 1988. There was also a limited edition of the soundtrack, which was released by Percepto Records in 2006 and includes twenty-six songs and four bonus tracks.

The film received positive reviews and became a cult film. On the Rotten Tomatoes website it has, out of a total of 14 reviews, 71% positive comments.

A group of aliens, who look like clowns, arrive from outer space and land in a small town called Crescent Cove. After landing, the ship takes the form of a circus tent.

These aliens need to capture humans and enclose them in cocoons that look like cotton candy. This substance, over time, dissolves the body of the victims. So the clowns insert a straw into the cocoon and suck up that broth.

I was passing by…

A young couple, Mike Tobacco and Debbie Stone, who were near there doing… well… things that couples do, see the ship and have no better idea than to go investigate. The clowns discover them and attack them… by shooting popcorn at them, but the boys manage to escape.

The first thing they do is go to Debbie’s house to take the popcorn out of their bodies. Later, this popcorn will turn into clown-headed worms. Apparently, they were clowns in a larval stage. Debbie will find out the hard way, when she comes home and these bugs attack her.

Don’t call the police! They won’t believe you!

For the time being, as good citizens, the boys try to warn the police. But Sergeant Mooney doesn’t believe them. They also fail to convince his partner, Dave Hanson, and the fact that Dave is Debbie’s ex-boyfriend doesn’t help.

Meanwhile, the clowns attack the town. To that end, they use some rather unusual methods: shadow puppets that come true, bloodhounds made from balloons, futuristic guns that look like toys…

Eventually, one of the clowns creates a shadow of a dinosaur, which devours a group of people and Hanson witnesses the entire scene. It is then that he begins to believe the boys’ story and decides to help. Also, the Terenzi brothers, whose job is driving an ice cream truck, join the group.

Dave returns to the police station, only to find it destroyed and one of the clowns using Mooney’s corpse as a puppet. The officer shoots the clown in the nose, causing the creature to start spinning and eventually explode. Good! We found the monster’s weakness!

A Lady in Distress

Meanwhile, the clowns capture Debbie. That’s when the group of improvised heroes heads to the spaceship to rescue the lady. There they find Debbie trapped in a sphere. But then a giant clown appears. He is the leader! This is where Officer Hanson puts into practice what he knows about the weakness of the klowns. Upon defeating the giant, the ship explodes, but the protagonists manage to save themselves.

Just when our heroes think they are out of danger, cakes start to rain from the sky and land on their faces.

This obviously suggests there would be a sequel. But, although they have tried several times to make one, at the time of writing these lines, I am not aware that anyone exists. If I’m wrong, let me know in the comments below.