Colliding stars… and girls in bikinis 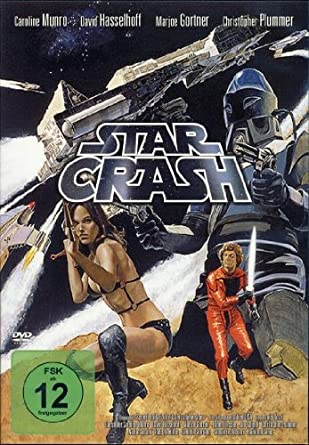 Colliding stars… and girls in bikinis

On this occasion, I am going to talk about a space opera that, at the time, lived in the shadow of Star Wars, but today, it has become a cult film. I present to you Starcrash.

The film was released in 1978. Its director and co-writer was the Italian Luigi Cozzi. In the leading roles, we can find Marjoe Gortner, Caroline Munro, Cristpher Plummer, Joe Spinell and David Hasselhoff.

Cozzi has described it as “science fantasy” (and not science fiction as one might suppose).

They commissioned the miniatures to Italian artists, while a team in the United States was in charge of other special effects. It took 6 months to film and they had to suspend filming several times, due to lack of budget.

At first, American International Pictures was going to distribute it, but they were not convinced by the final product and rejected it. Fortunately, they got New World Pictures to accept it.

Composer John Barry handled the soundtrack creation. BSX Records published it in a limited edition of 1500 copies in December 2008. The material had 14 tracks.

The film premiered in Los Angeles on May 7, 1979. It was nominated for Best International Film at the 7th Saturn Awards.

Variety magazine said it had a weak script and that Cozzi seemed to have no plan. They didn’t like the photography work or the special effects either. The Monthly Film Bulletin gave it similar reviews. In retrospect, Kurt Dahlke called it a masterpiece of accidentally bad film making. RL Shaffer, however, gave it a 10 out of 10 rating. In 2015, Rolling Stone magazine included it in a ranking of the best 50 science fiction films of the ’70s.

Personally, I love those leather suits that the characters wore, especially men.

Everything begins with a ship searching for Count Zarth Arn, played by Spinell. Approaching a planet, an unknown weapon begins to drive all the crew crazy. Some manage to get in escape pods, as the ship crashes on the planet’s surface.

Meanwhile, the space police capture a smuggler ship. Its crew members are Stella Star (a girl who insists on walking around scantily clad, played by Munro) and Akton, played by Gortner. The couple then meet the robot Sheriff Elle, played by Judd Hamilton, and Chief Thor, played by Robert Tessier. Akton and Stella try to escape through hyperspace. The police capture them anyway, but they have enough time to discover one of the pods with the sole survivor.

However, they are unable to do anything with this information at the moment, as they are sentenced to different penal planets. Stella manages to escape from the place where she was being held doing forced labor (wearing the same bikini as before).

Elle and Thor capture her again, but this time they free her, since the Emperor (played by Plumber) has given her the mission of finding his son, who was traveling on that ship that crashed. He also tasks her with finding the Count’s secret weapon. Assuming that she would need Akton’s help, they free him as well. Thor and Elle complete the group. Together they leave in search of the 3 pods and the remains of the ship.

They find the first pod on a beach on a planet inhabited by Amazons. They find no survivors, but the Amazons capture Stella. Elle manages to rescue her and in their escape, they must face a giant robot amazon (wich seems a lot like Afrodite from Mazinger series). Fortunately, Thor and Akton come to help.

Later, they arrive on a wintry planet to investigate the crash of the ship. They find no survivors either, and to top it all off, Thor betrays Akton and reveals himself to be an agent of the Count. Then, he leaves Stella and Elle on the planet. Elle uses his energy to keep Stella alive in the planet’s freezing weather.

Akton then recovers, and conveniently, we learn that he has supernatural powers that help him defeat Thor, retake control of the ship, and return for his comrades. Using those same powers, he manages to unfreeze Stella as well.

As they approach the third planet they were to investigate, the Count’s secret weapon attacks them, but they manage to resist long enough for Akton to get the ship out of the affected area. Stella and Elle go down to the planet’s surface. There they have a battle with some cavemen who manage to destroy Elle.

As they are about to capture Stella, a mysterious man appears and shoots them with laser beams emanating from a mask he wears. When the battle is over, the stranger reveals himself to be the Prince (played by Hasselhoff). The cavemen attack again, but this time, Akton comes to their aid with his lightsaber.

From there they head to the underground lab to sabotage the secret weapon. But there the Count captures them with the help of his robot guards. The villain reveals to them that his plan is to use them as bait to lure out the Emperor and activate the weapon’s self-destruct mechanism. With this, he would destroy the entire planet.

Once the Count leaves, Akton confronts the robots. He manages to defeat them but they inflict a mortal wound on him. When the Emperor arrives, he fires a beam that stops time, allowing the rest of the group to escape.

A battle then breaks out between the Emperor’s forces and the Count’s, with the Count as the winner. Thus, the Count prepares to attack the planet of the Emperor. There’s only one way out: Elle (now completely repaired) and Stella volunteer to run a massive floating city on a collision course with the Count’s ship. Will they be able to fulfill their mission? And a more important question: will they manage to do it and live to tell the tale? You’ll have to watch it to find out.