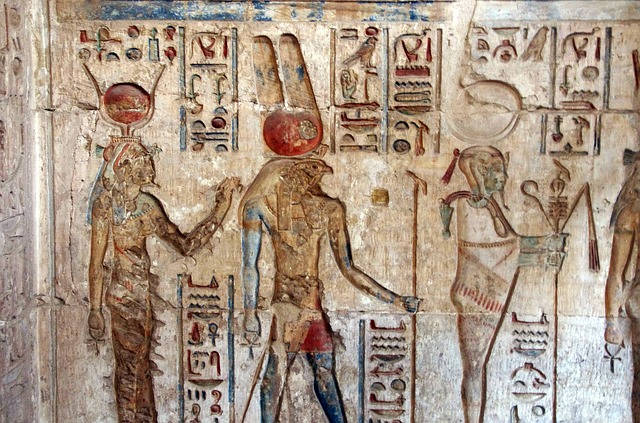 Since this post had so many views, I decided to add some extra content. This time I bring to you the most famous legend of ancient Egypt: The story of Osiris. And why do I say he has a dysfunctional family? Just wait to find out what his brother did to him:

In the beginning, Osiris and his wife, Isis, ruled Egypt as king and queen. They were benevolent rulers and people were happy with them. Osiris taught humans agriculture and fishing. Isis, taught them to weave and the fundamentals of medicine.

Meanwhile, his brother, Seth, ruled over the desert and foreign lands. It seems that our dear Seth was not satisfied with owning most of the world. No, no, no, no, no, he wanted, also, that little country his brother owned. So he designed his master plan: A box. Yes, a box. It seems that, at that time, the gods did not have many ideas. Seriously speaking, he went to a banquet in Osiris’s honor with a gift: a luxurious chest. But (a small detail) he would only give it to the one who could get into it. It seems that the guests were bored, because they thought it would be fun, so they all wanted to give it a try. Most of them failed, but then, Osiris tried.

That’s when Seth said: This is my chance! And then, he just closed the chest and made Osiris his prisoner. Obviously there was resistance. The other guests weren’t going to sit there and do nothing, while their charismatic leader was being kidnapped. But it seems like Seth didn’t just go to the party alone. I don’t have many details on who they were, but Seth had henchmen who kept Osiris’s supporters, especially Isis, at bay, while he was taking the chest and leaving.

Photo by Andrés Dallimonti on Unsplash

Then, with the chest under his arm, Seth went to the Nile, where it meets the Mediterranean Sea, and threw the chest there. It is seen that the chest was not waterproof, because Osiris drowned. So, Seth was free to take over the throne.

But the story did not end here, because Isis, as a good wife that she was, did not rest until she found her husband’s body. She found it in Byblos, Lebanon. She took him to the swampy area of ​​the Nile Delta and took refuge there with him. But she had the bad luck, that during a night hunt, Seth found the body. It seems that his envy still lasted, because he just cut the body into fourteen pieces and scattered them throughout Egypt. Another version says that he dumped them into each of the tributaries of the Nile. But I think you get the idea anyway.

So Isis went, again, with the help of some followers like Thoth, Nephthis and Anubis, to search for the parts and put them together (I think she sewed them). Then she embalmed it with the help of Anubis: They wrapped him in strips of linen. Once mummified, Isis flapped her wings over the body, screamed and, with those actions, cast a spell that brought him back to life.

But the resurrected Osiris did not rule again on earth. Instead he became the king of the underworld. He had a son with Isis: Horus. Isis hid her son in the papyrus thickets of the Nile Delta to protect him from Seth (by the way, this part of the story sounds a lot like the story of Moses to me).

The most famous eye in the world

In one such confrontation, Seth found Horus asleep under a palm tree in an oasis, grabbed him from behind and gouged out his eyes.

Seth buried the eyes in the sand and two lotuses grew on the spot. Meanwhile, Horus writhed in pain. But Hathor, who was looking for him, found him and came to his aid. She hunted a gazelle, milked it and used the milk as an ointment to heal the young god’s wounds.

Then they built him a magic eye so that he could see again. Since then, the Egyptians use the symbol of the eye of Horus as a protection amulet.

And everything goes gay

On another occasion, Horus was lying down, Seth lay down behind him and…well…basically…tried to…rape him. But Horus was more intelligent, and received Seth’s semen in his hands. Horus then went to see her mother and showed her his hands impregnated with Seth’s semen.

Isis screamed in fright: Apparently, in ancient Egypt, the problem was not so much homosexuality, but the fact of being passive. Apparently the Egyptians used to see this as a sign of weakness and humiliation. Therefore, the other gods might decide that Horus would not be a suitable ruler.

Later Seth ate the lettuce. So when Seth accused Horus of being passive with him, the other gods called the semen to bear witness. Thus, the semen of Horus was proved to be inside or Seth, leaving Seth as the humiliated one.

In another conflict, Seth proposed a competition: They would each build a stone boat and use it in a race down the Nile. The winner would get the crown of Egypt. Horus accepted.

Seth took a club and hit the top of a mountain. With the rubble he built his ship. Meanwhile, Horus had built a ship out of pine and covered it with plaster to camouflage it as stone.

The result was that Seth’s ship sank and he was the laughingstock of all the gods. Seth jumped into the water and turned into a hippopotamus. He attacked Horus’s ship and, because it was fragile, it broke apart and sank as well. Horus threw his spear at Seth, but the other gods stopped the fight.

Seeing that the conflict seemed endless, Shu and Thoth convinced the other gods to send a letter to Osiris, asking for his advice. The king of the dead obviously replied indignantly that his son was the undisputed heir to the throne.

He said, too, that the underworld was full of demons who feared no god, and if he set them free, they would rip out the hearts of all the gods.

The gods were afraid and they obeyed. But Ra still loved her son Seth. So instead of punishing him, he took him to his boat, so that with his strength, Seth would help his father fight the Apep snake, during their journey through the sky of the underworld.

Thus, Horus became the next pharaoh of Egypt and would later leave his place to a new generation of human pharaohs. With this divine right, supposedly inherited from Horus himself, the pharaohs legitimized their power. That and a robust army, of course.