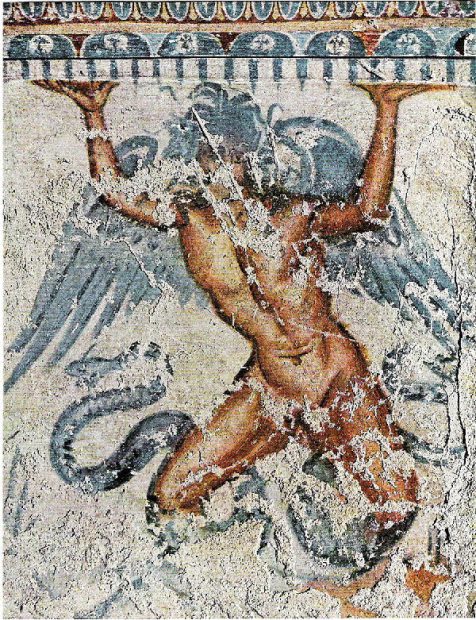 Since many people visited this post, I have decided to add some extra content to it. Much has been said about the war between the Olympian gods and the Titans, but hardly anyone mentions the other great war in Greek mythology: The gigantomachy. So I set out to innovate a bit and tackle the issue. Here we go:

It turns out that after the war between the Olympian gods and the Titans, the goddess Gaea was sorry that her children, I mean, the Titans, were serving a life sentence (literally) in Tartarus.

She did not come up with a better idea than to incite her other children, the giants, whom she had born before the Titans, to rebel against the Olympians and free the Titans.

So the giants started throwing burning trees at Olympus and, for some reason, that bothered the gods.

Thus a long war broke out between the gods and the giants. Eventually, the gods managed to defeat them all… all except Typhon.

A Brief Description of Typhoon

Typhoon was the most monstrous of the giants: He had a hundred serpent heads that touched the sky. He had two large bird wings that produced hurricanes and earthquakes when moving. His outstretched arms touched east and west. His eyes gave off a scorching, withering fire, so no one could look him in the face. His muscles were mountains. His fingers were dragon heads. His breath was a wind that swept away everything in its path (that is, a typhoon). He could vomit fire and lava from his mouth. Bunches of snakes formed his legs. Rumor had it that on his right arm, he had a Motorhead tattoo.

Returning to the gigantomachy

It turns out that when the gods had to face Typhon, they were scared. So they fled to Egypt and turned into animals: Apollo became a raven, Dionysus a deer, Artemis a cat, Hera a white cow, Aphrodite a fish, and Hermes an Ibis (this was the explanation the Greeks gave for the syncretism that occurred between their religion and the Egyptian after Alexander the Great conquered Egypt).

But Zeus stayed to face him. He hid and threw lightning bolts at Typhon from a distance (it´s some kind of dragon ball fighting scene). With this tactic, Zeus managed to weaken him a bit. So he went over and cut off his hands with a sickle.

Typhoon’s cry of pain echoed across the land. Still, he managed to recover, took the sickle from Zeus and cut the tendons in his arms and legs.

Typhon kept the tendons, along with Zeus’s thunderbolts, in the Corycia cave, guarded by a dragon named Delphine. But later, Hermes and Hegipan managed to steal the tendons. They put them back on Zeus.

In another version, Typhon held Zeus captive in the same cave. Meanwhile, Cadmus disguised himself as a shepherd and Pan lent him his flute so that he could lure Typhon with his music. The monster was so enchanted by the music that he challenged the shepherd to a contest. The prize would be a marriage with a goddess. The shepherd would play the flute, while Typhon would play a great horn that he had created from the clouds.

Cadmus replied that he didn’t think it was fair competition and that he would need to use his lyre, but he had no strings for that instrument. The monster then set off in search of the tendons. But while Typhon was distracted by Cadmus and his music, Zeus crawled over to where the lightning bolts and tendons were and managed to put them back on him.

He ascended to heaven in a chariot drawn by winged horses and from there, he saw Typhon wreaking havoc on the world. That was not going to stay that way, of course not.

Zeus went back to Olympus to look for more lightnings. The god went to Nisa to face Typhon again. This time the Moirae helped him: they tricked the giant into eating human flesh. They told him that the meat would give him greater strength, but in reality it weakened him.

Zeus started throwing lightnings at him again. This time Typhon defended himself by throwing mountains at him. But it was not enough to defeat Zeus, so he fled to Sicily. It was then, that Zeus took advantage of that moment of weakness and threw lightning at Mount Etna. The lightning released rocks that engulfed Typhon and drowned him.

Since then, rumor has it that the volcano’s fire is actually what’s left of Zeus’s lightning bolts and that the lava is something like Typhon’s blood.

Another version says that Apollo killed Typhon in Egypt.