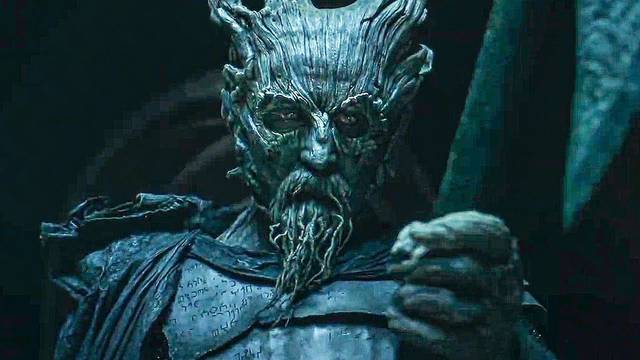 Since many people visited this post, I have decided to add some extra content to it. This time I will talk about a film with a medieval setting, halfway between horror and dark fantasy: The green knight.

What’s the film about?

The film is an adaptation of a 16th century poem. The protagonist is a young man, a member of the nobility, but with little prestige, who dreams of being a knight and, eventually, becoming a king.

He’s not on the right track: He prefers to spend his free time in a brothel and later says he was in church.

One day he was celebrating Christmas at the king’s court. In the middle of the celebration, a kind of humanoid ent appears in court and proposes a challenge: Whoever volunteers must fight with him. The volunteer only has to land one blow, but on one condition: the following year, he must travel to a chapel, far from there, in the middle of nature.

All the old and seasoned knights of the court flinch, probably because they understood the danger of the challenge. The protagonist is the only one to volunteer, eager to rise through the ranks of the court.

But our man makes the mistake of underestimating his opponent: he cuts off his head, believing that he will defeat him in that way, but the green knight simply picks up his head and says: “see you next year.”

Of course, the protagonist could not attend the appointment. His romantic interest (a prostitute who soon finds out that she is only that for him) explicitly suggests it. But he gave his word and, at that time, a man had to keep his word. His mother, the witch Morgana, gives him a magic belt, which is supposed to help him survive.

The point is that our hero sets out on the journey and, along the way, all kinds of things happen to him, and he meets all kinds of fantastic creatures. In this journey, little by little, the character is facing different trials and temptations, and he discovers the virtues that every knight should have.

The aesthetics of the film reminded me, to some extent, of the famous Excalibur, from 1981. I made a post about it thay you can read here.

The ending, although sad, is an ending with a lot of sense, considering the theme of the film.

What about the original work?

The original poem is a typical medieval tale, where the protagonist has to face various tests and temptations. The prize for passing these tests is usually immunity to some kind of danger or good fortune.

Gawain must demonstrate his moral virtue and his adherence to the code of chivalry, thus proving himself worthy of becoming a knight.

Thus, our hero stays at Sir Bertilak’s castle. Secretly, his host puts him through various tests, taking the form of a knight with green skin and armor. Gawain passes the tests, but only by intuitive courtesy or just by chance.

In one of these tests, Gawain must promise that every time Bertilak haunts an animal or Gawain gets a gift within his castle, they will exchange their gifts. But the code of chivalry also requires him to respect the rules of courtly love. This means that he must also comply with the requests of a damsel. So he has to accept a girdle from Bertilak’s wife, who was instructed by her husband to seduce Gawain. This action conflicts with his promise.

Fearing death, Gawain secretly keeps the girdle. When he discovers the truth, he realizes that he has fulfilled his mission but has failed to be virtuous.

One thought on “The Green Knight: A magic film”