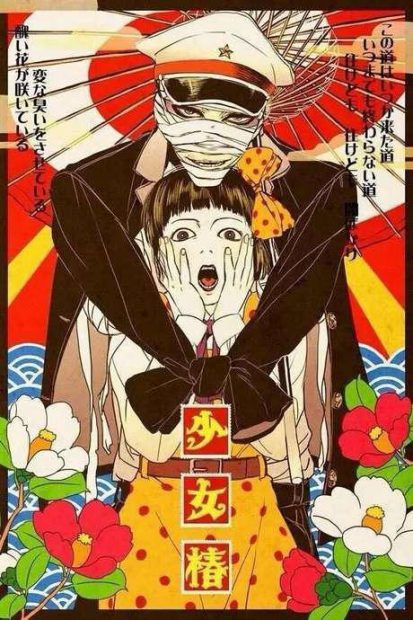 On this occasion, I am going to talk about an anime that was very controversial due to its sad and raw scenes: Midori (Shôjo tsubaki: Chika gentô gekiga).

When it was released, the reception was hostile, with authorities in Japan seizing and destroying most of the original copies. Only a six-minute version survived.

The anime is an adaptation of a manga called Shojo Tsubaki, which in turn is based on a popular story that takes place in Japan between the Meiji era and the Showa era.

The author, Hiroshi Harada, was an animator who worked at various animation studios, but was unable to get any production company to accept the entire work. So he decided to make it himself. He drew each frame one by one, reaching a total of 5000 and taking 5 years to finish the entire film.

On May 2, 1992, it premiered in a red tent inside the Mitake Jinja temple in Tokyo. They had no budget to screen more than 52 minutes, but they still screened it in full. It was the last time: After that, the authorities demanded up to 26 cuts.

In the 1990s, they shipped the film out of Japan for screening in other countries. When it returned, the authorities destroyed the copies, but Harada still had one. Still, the author was angry and refused to allow it to be screened again, even in its censored version. Over the years he became more permissive and approved its distribution for the French company Ciné Malta, which released a 48-minute DVD version.

In 2013, the original 16mm negative was discovered in an IMAGICA warehouse. With it, they created a new print and a digital master. So they started showing it in Japan. A Blu-ray edition is also planned.

In 2016, the production company TORICO released a version with actors, starring the model Risa Nakamura. The film includes some animated scenes to represent the dreams and fantasies of the protagonist.

Before we continue, spoiler alert: If you’re thinking of watching the movie, you should stop reading now.

Midor is a twelve-year-old girl who lives at the end of the 19th century. Her father abandoned her and her mother is sick. So she has no choice but to go sell camellias on the streets of the city.

A man in a top hat listens to her story and offers to buy all her flowers. Also, he tells her where to find him if she need help.

The girl returns home. She is excited with the idea of ​​telling her mother what had happened. But then she discovers that her mother has died and some rats are eating her body.

With no family left, Midori decides to look for that man. The direction he had given to her turns out to be a circus. There she meets strange characters who do all kinds of bad things to her. At first, Midori takes refuge in some puppies, which she secretly took care of. But one of the members of the circus, named Kanabun, discovers it, kills the puppies and secretly prepares a soup with their meat. Then, during the meal, he informs the rest what he had done and Midori bursts into tears.

Later, a magician named Masamitsu joins the circus, putting on a show in which he gets into a bottle. This show turns out to be very successful.

Masamitsu falls in love with Midori and makes her his wife. At this point, we see some scenes of surreal gore, which would be representing Masamitsu’s sexual obsession with Midori.

Midori receives an offer to act in a movie, but Masamitsu, fearing he will lose her, locks her in the bottle.

Some time later, during a show, Masamitsu gets nervous and the audience boos him. To get even, Masamitsu mutates some of them into horrible monsters and makes others blow up. This forever ruins the popularity of the circus.

The other characters decide to take different paths and Midori, after reconciling with Masamitsu, decides to go with him. But something goes wrong: While Midori is elsewhere, a shoplifter kills Masamitsu. When Midori goes back to look for him, she can’t find him anywhere and thinks he has abandoned her.

At this moment her mind collapses and she begins to hallucinate, seeing her circus companions and her parents as ghosts, who laugh at her. Then, the girl rages, takes a stick, screams and hits what she thinks are her parents and the circus staff, wishing death to all of them.

This is where it is revealed that she was hallucinating. The movie also raises the question of whether everything she has experienced was ever real. Midori lets go of the stick, begins to cry and her figure fades into a white background. Finally, only her voice is heard reciting a poem, which suggests that she was already dead.