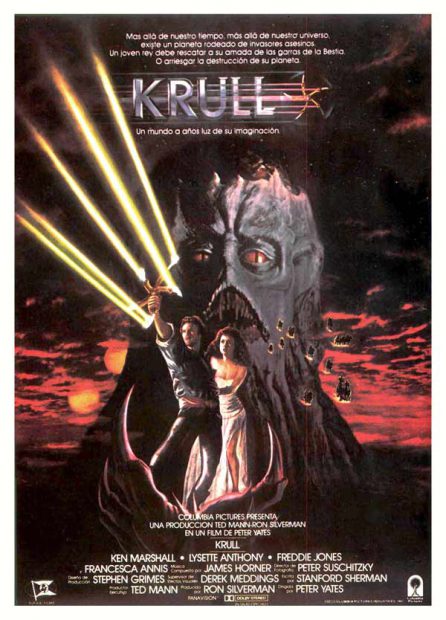 On this occasion, I will talk about a great fantasy movie from the ’80s that, although not very successful at that time, became a cult film: Krull, from 1983, an exquisite combination of epic fantasy and science fiction.

Stanford Sherman wrote the screenplay and Peter Yates directed the film. Ken Marshall, Lysette Anthony, and Freddie Jones played the lead roles. It was released in 1983 and was a box office flop but, as I said before, over time, it became a cult movie.

They came from outter space

It all begins when a spaceship invades a planet called Krull. The ship lands, and becomes a castle, which they call “The Black Fortress.” From there, their leader, a kind of cosmic horror, known as “The Beast”, sends his assassins: Knights armed with canes that shoot laser beams.

The assassins begin to take lands without any resistance. In order to stop them, two rival kingdoms decide to unite through marriage. Princes Colwyn and Lyssa, already had a relationship before, so they gladly accept the commitment. There is also a prophecy that Lyssa’s son will rule the galaxy. A Christian allegory? Maybe.

The wedding ceremony consists of the prince placing a lit torch in the water, and then the princess must take the fire from the water and return it to the groom. This ritual, which itself looks very beautiful, becomes important for the story later.

Until death do us part

But they can’t complete the ceremony: The assassins attack the castle and kidnap the princess. Most of the court die, including the king. But the prince miraculously survives the battle. An old hermit named Ynyr had foreseen what would happen, and had come down from the mountains to apply medicine to Colwyn’s wounds.

The prince, now king, wishes to rescue his beloved, but Ynyr warns him that he will need more than an army to defeat the Beast. This is how they set out in search of a legendary weapon: A metallic sharp five-pointed star they call “The Glaive.”

But finding the Glaive is only the beginning: The Black Fortress teleports every morning to a new location, so Ynyr suggests looking for an old friend of his: The Emerald Seer. The old fortune teller could use his powers to find the next castle location, or so they thought.

On the way to the fortune teller’s home, they meet a clumsy magician named Ergo “The Magnificent”, who decides to follow them, a little out of fear and a little out of ambition.

They then come across a group of runaway slaves, who now function as a gang of robbers, one of them played by Liam Neeson and another by Robbie Coltrane. (Hagrid in Harry Potter). The prince convinces them to join his cause, for the good of the world and their families, and thus they become the improvised army that will march against the Beast and his minions.

Also, during this trip, they meet a Cyclops, named Rell. His race used to have two eyes like humans, but today they are at enmity with the Beast and his minions, because they made a pact with him: They gave up one eye in exchange for being able to see the future. But the Beast deceived them: He only allowed them to know the exact moment of their death.

The fortune teller agrees to help, but the Beast’s powers block his vision, so they will have to take him to a special place where his gift is strongest.

Unfortunately, the plan fails (I won’t say how), but Ynyr has a new idea: He decides to consult a creature known as “The Widow of the Web.” The widow is known to kill everyone who comes to see her, but the old man seems to have known her from a time before she became a monster.

Indeed, she was an old love of his. He convinces her to use a magical hourglass to temporarily paralyze a giant spider that hunts in the web surrounding the widow’s home. When they meet again, she reveals to him that they had a son, but she killed him and now her punishment was to be locked up there.

The widow agrees to help, despite the high price she will have to pay: She breaks the hourglass and gives the sand to Ynyr. As a result, they get the information, but she dies. However, the spider will not attack him as long as he is holding the sand. The problem is, that the sand inevitably runs off, like time itself, and once it runs out, he will die too.

But before dying, the old man manages to get back to where the others are, and reveal the location of the fortress.

Now the group has another problem: Their destination is too far away. So Rell suggests searching for the “Fire Mares”, which are creatures that can run fast enough to get them there in time.

Once they tame the mares, Rell decides to stay behind, perhaps because his end is near and he must face it alone. His companions accept his decision and, after mounting the mares, they head towards an epic battle inside the fortress.

While all this is happening, Princess Lyssa tries to escape from the fortress, while resisting the Beast’s repeated attempts to seduce and tempt her. He proposes to her to become his Queen, so that together, they would rule the entire universe. He even takes the form of Colwyn to try to confuse her.

Will the heroes succeed in rescuing the princess before she succumbs to the villain’s mind control? You’ll have to see it to find out.