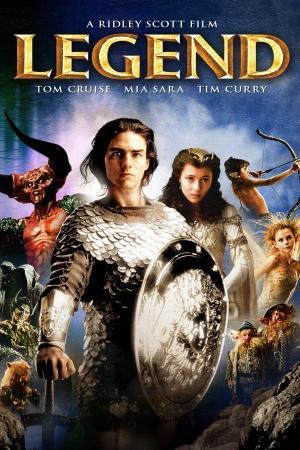 Since this post got many views, I’ll add extra content. This time I will talk about another great movie from the ’80s: Legend, from 1985, directed by Ridley Scott.

In this case, again, it was not a very successful film at the time. But today it is a cult film. It was nominated for an Oscar for Best Makeup (I’ll come back to this topic in a bit).

It all begins with a goblin named Blix (who looks more like a witch than a goblin) traversing a swamp to reach his master’s lair: A demon we only know by the name “Darkness”.

There, Darkness tasks him with hunting down a pair of unicorns, using innocence as bait. He explains that the sunlight damages him and that he needs the unicorns to die so that the sun will never rise again.

At the same time, we meet a princess named Lily, who likes to wander through a forest teeming with life and to visit peasants. When I watched it again, I found it funny that she did not care at all about the class difference.

Lily also has a friend named Jack (played by a very young Tom Cruise). The boy would be a mixture between a rogue and a scout. He likes to wander through the forest and talk to the animals. This time, they both meet, and he decides to take her to see the unicorns.

As soon as she sees them, she is dazzled and begins to sing a melodic song that attracts them. So far, so good, but she can’t resist touching one of the unicorns. While it’s forbidden, it wouldn’t have been so bad, if it weren’t for the fact that all the time, Blix was watching from the shadows, and the moment she touches the animal, the goblin takes the opportunity to fire a blowgun at the poor unicorn.

Both animals flee, creating great confusion in the girl and the boy. On top of that, suddenly, a snow storm came. Jack explains that she did something forbidden, but neither of them suspects what’s going on, yet. The topic of conversation changes and they begin to talk about their relationship. He is worried that a noble lady like her would never marry a peasant like him. But she explains that, as the princess, she can impose any condition to men who wants to marry her. Then she takes off a ring, says she will marry the man who finds it, and throws it into the river. Jack jumps into the water without hesitation, but can’t find the ring, for now.

The goblins chase after the injured unicorn and manage to cut off its horn. At that moment, a snowstorm breaks out and the forest falls under the yoke of winter. Lily overhears a conversation between the goblins where they say that they were able to get the horn because the unicorn was attracted to her beauty and innocence.

Making up for it

This information is devastating for the girl who, to try to clean up her guilt, decides to try to solve all the problems.

Meanwhile, the goblins are feeling very comfortable with the new winter weather. But Darkness tells them that it is not enough. They must capture the other unicorn as well.

Meanwhile, Jack encounters a group of dwarfs and a fairy named Oona (whom we see only as a point of light for now). Their leader is a fossegrim named Gump, played by a scantily clad little boy. When Jack confess that he took Lilly to the unicorns, at first, they want to punish him. But he explains that he did it out of love and they forgive him.

After discussing the plan, they decide to leave one of the dwarves to take care of the unicorn that remains alive. Meanwhile, they head to a cave full of weapons and armor to get Jack some good combat gear. At that moment, Oona takes humanoid form, but only before Jack and asks him to keep the secret. This is the first clue about the fairy’s romantic interest in Jack.

Meanwhile, knowing that the goblins are after the unicorn, Lily tries to warn the dwarf who takes care of it, but the goblins capture her and the animal and take them to the master.

Learning of this, Jack’s group heads to Darkness’s lair. They must cross a swamp where they meet a hag that wants to eat them. But Jack manages to trick her with flattery into letting her guard down so he can kill her, by severing her hed with his sword.

Inside the lair, Darkness converses with his father. He says that he feels attracted to the princess. Her father explains that it is her innocence that attracts him and that he must make her one of them. Thus, he sends a masked character wearing a beautiful black dress. The creature seduces her by dancing until, suddenly, it disappears and she appears wearing the same dress.

So, for the first time, we see Darkness, masterfully played by Tim Curry. It is difficult to recognize him because of the thickness of the costume. The horns alone must have weighed a ton.

Thus, Darkness and the princess have an awkward conversation. He wants her to be his wife. She refuses at first. He tries to play on her guilt for facilitating the unicorn hunt. Eventually, she tells him that she will marry him on the condition that he let her kill the unicorn. Darkness feels so pleased that he laugh aout loud.

Jack’s group manages to overhear a conversation where Darkness admits that the light harms him. So, Jack comes up with the idea of ​​gathering all the reflective objects they can, to bring the light from outside and attack Darkness with it.

Will they be able to carry out their plan? Will a little light be enough to defeat all the evil in the universe? You’ll have to watch it to find out.