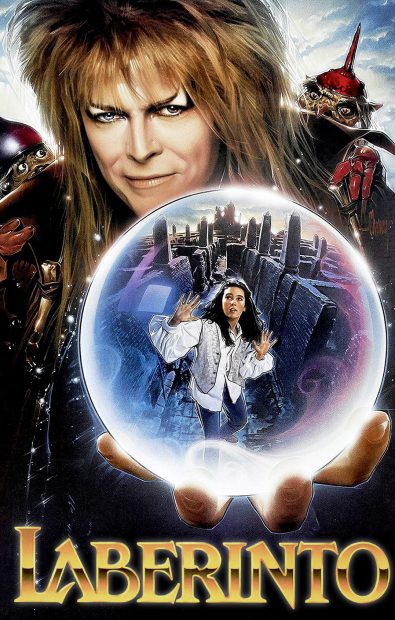 Well, I know that the title is somewhat controversial, but I sincerely believe that, when it comes to George Lukas’ work, the film that I am going to talk about, far exceeds his most famous creation. So, today we are talking about Labyrinth, from 1986.

As I already mentioned, George Lucas worked on this project, although not as a director, but as a producer. But he was not the only genius who participated: The team included the creator of the Muppets (who literally filled the screen with puppets) and the great rockstar, David Bowie, playing the main villain, with a very visual kei look. The director was Jim Henson. He is the same one who directed Dark Crystal. I will talk about that movie very soon.

The film is inspired by the story “On the other side”, by Maurice Sendak. It also has influences from The Wizard of Oz and Alice in Wonderland, among others.

For certain scenes in the film, they used real owls. But for the initial title sequence they created the first photorealistic CGI animal. A real credit for the time!

The film tells the story of a teenage girl whose father has remarried. Her stepmother is not exactly miss congeniality. Also, she has a half brother (son of the aforementioned stepmother) who, at the moment, is just a baby.

The girl takes refuge in the stories and fantasies of her childhood, to try to forget the problems of her complicated life. But this time, her stepmother interrupts her games, to ask her to take care of her brother, while she and the father, conveniently, go out to a meeting.

The point is that at that moment, the king of the gnomes appears, played by David Bowie, with a hairstyle that we can never forget. She regrets her wish, but the king tells her that there is no turning back. Of course, if she wants to get her brother back, she can go find him at the king’s castle, which is in the center of the labyrinth. But she must do it in less than thirteen hours. If she doesn’t succeed in that time, her brother will turn into a goblin.

She tries to solve the maze, by placing marks to orient herself. But the maze is constantly changing and is full of dangers. At the same time, the king tries to prevent her from succeeding, with mind games, seduction, riddles, tricks and other maneuvers.

But along the way, she will meet new friends: a grumpy dwarf named Hoggie, a large, hairy monster named Ludo (is it my imagination or is it a copy of Chewbacca?) And a brave furry knight named Sir Didymus, who has a steed named Ambrosius, which is… basically… a dog. All of them will help her on her adventure.

A round of applause for the special effects

We have to make a special mention of the scene of the impossible stairs, inspired by the work of MC Escher. Nowaday, they could do it easily with CGI, but at the time, they had to do a lot of stage work. They also used a complicated harness system to get David Bowie’s stuntman to do gravity-defying moves.

For the scene where the king moves the crystal spheres, a juggler, positioned behind David Bowie, performed the movements “by heart”, since he could not see what he was doing.

During the final confrontation, the king offers the girl an ideal world, in exchange for her staying by his side. At that moment, she is faced with a dilemma: To continue dreaming of fairy tales, or to accept reality as it is? What decision will she make? You will have to watch it to find out.

There is a novel, written by ACH Smith, that narrates the same events as the movie. In English, it can only be found at auctions. The Spanish version is called Inside the Labyrinth and it was published by Nocturna ed, Spain 2010.