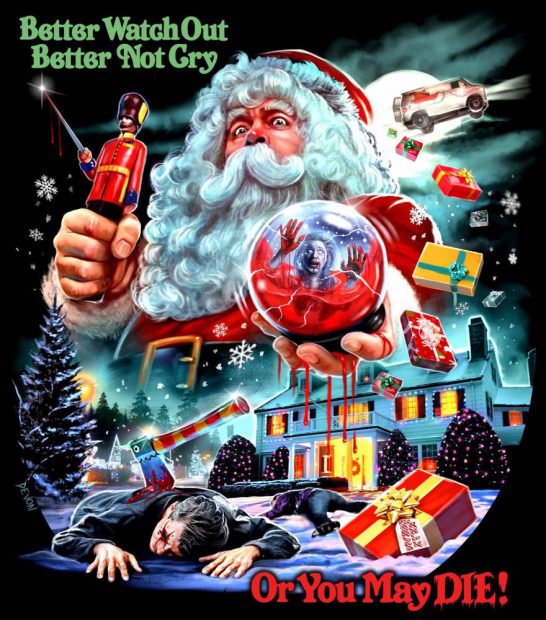 Continuing with the tradition of dedicating December to Christmas horror, here I bring to you a review of another film of this genre: Evil Christmas.

This movie seemed a bit strange to me, considering what we’re used to seeing in the genre. But I think it qualifies as horror because of the way it creates tension. I mean, it’s got its share of blood, but most of the time, it’s got us expecting the worst. We know that the character has some “mental issues” and we are all the time waiting for him to explode and do something terrible. A scene in which he is with some children and adults, by that time, already know what he is capable of, is especially tense.

The film is also known by names like “You better watch out” and “Terror in toyland”. It premiered in 1980 and Lewis Jackson was its director. At the time, the public seemed to forget it, but over the years, it became a cult film.

In December 2006, Synapse Films released it on DVD.

It is apparently a prequel to the movie Silent night, deadly night. I’ll probably talk about it very soon.

It all begins in the past, with two children (brothers) spying on Santa Claus (who is actually their father in disguise). One of them, Harry, reproaches the other, Phillip, for having said that Santa Claus did not exist. The discussion comes to nothing, for the moment.

Later, Harry sees his father, still dressed as Santa Claus, groping his mother. The scene leaves him very disturbed, so he locks himself in the attic, breaks a snowball and cuts his hand with a fragment of the shattered glass.

Returning to the present

Now we find an adult Harry who sleeps dressed as Santa Claus and has his house decorated with toys and Christmas decoration. Another of his customs is to go out on the terrace and spy on the neighborhood children with binoculars.

His working life is not good: He works in a toy factory. The company recently promoted him, but he preferred to work on the assembly line. One of his colleagues takes advantage of this and asks him to replace him on one of his night shifts, arguing that he wants to go fishing with his wife and children. Harry agrees, but when he leaves work, late at night, he sees his colleague drinking in a bar with other men.

Harry spends every Christmas with his brother and his family, but this time, he calls to cancel. His reasons: he has other plans. His brother feels that something is wrong, but his wife convinces him not to give it too much importance.

During a factory New Year’s party, Harry exchanges a few words with the owner of the company and an executive who is helping him with a supposed charity. The factory was going to distribute toys to some hospitalized children. But after a short conversation with them, Harry learns that there is something fishy about the whole thing. I didn’t quite understand what the problem was, but it became clear to me that the factory was just looking for publicity and didn’t really care about the children.

And what had to happen happened

All these events lead Harry to make the decision to become Santa Claus himself, to reward the good and punish the bad. You can already imagine where all this is going, but if you want to know for sure, you can see the film.