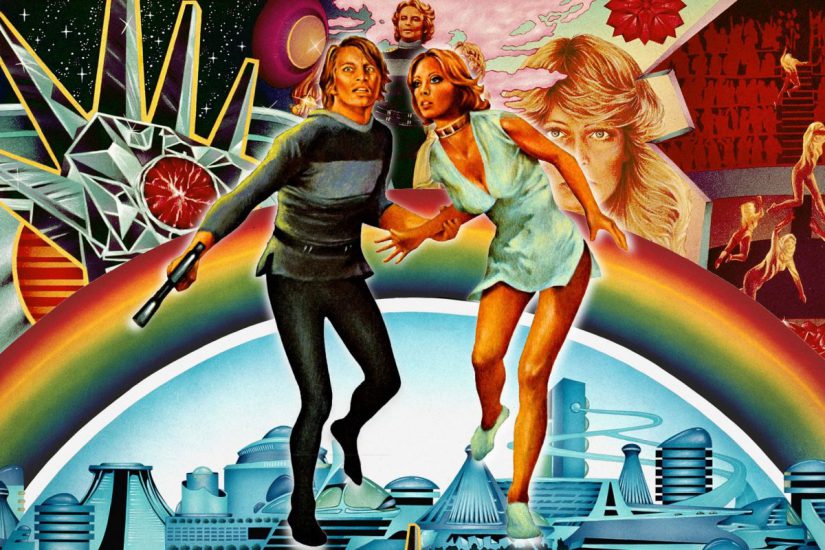 This time I’ll talk about a strange science fiction movie, where the characters had to succeed before the age of 30 because… basically… they died after that: I present to you, Logan’s run.

The film is based on a novel of the same name, written by William F. Nolan and George Clayton Johnson. After publishing it in 1968, they sold the rights to Metro Goldwyn Mayer for its film adaptation.

Michael Anderson directed the film and the cast included Michael York, Richard Jordan, Jenny Agutter and Peter Ustinov. they shot the film partly at the company’s studios and partly in Dallas. In that city, they managed to take advantage of modern glass architecture to show the futuristic city of the characters and thus saved 3,000,000 dollars. A landscape artist helped achieve the dilapidated look of the buildings in the outside world. It was also the first film to use laser holography.

It was released in 1976, had a notable success at the box office and became a cult film. The film won the 1976 Oscar for Best Visual Effects. It was also nominated for best art direction and best cinematography. In 1977, it won the Saturn Awards for Best Science Fiction Film, Best Art Direction, Best Cinematography, Best Costume Design, Best Makeup, and Best Set Design.

It is the year 2274. An ecological disaster has forced humans to live in isolation in a city protected by a dome, near what was once Washington DC

In that city, computers take care of all the tasks so that people can live a life of carefree pleasures.

But of course, it is too good to be true: To make sure resources don’t run out, the computers set up a rigorous system, that limits citizens’ lives to 30 years. Each person has a device in the palm of their hand that, when the time approaches, begins to flash a red light.

At that moment, the individual has two options: Accept his death or submit to an event called “The Carrousel”

What is the Carrousel?

The Carrousel is a mixture of entertainment and religious ritual. The participants gather in an amphitheater, surrounded by an audience of younger people. There they begin to float in circles towards a device on top of the structure that fires a laser weapon at them. All while the public acclaims them.

According to popular belief, if the citizen obeyed the laws, he or she can reincarnate into a clone that would be a replacement, but if he or she was not a good citizen, he or she disappears forever.

Another explanation that emerges from the dialogue is that the Carrousel provides an additional year of life, but only to those who survive.

Some citizens want to live longer and try to flee the city. This is where the protagonist, Logan 5, comes in. He is a kind of policeman, who chases these runners, along with his partner Francis 7. In one of his missions, Logan finds, among the belongings of a runner, an ankh-shaped amulet.

Later, he goes on a date with a woman named Jessica 6, who belongs to an underground group, who helps the fugitives get to a place called The Sanctuary.

The computers assign Logan the mission to infiltrate the group, find the Sanctuary and destroy it.

How will I do that?

That’s the logical question Logan poses. But computers already have that problem solved: When Logan looks at the palm of his hand, he realizes that he’s suddenly on the verge of 30.

The fact that he’s on the brink of death himself, makes it easier for him to question the decisions of computers. It doesn’t take long for him to become a fugitive, but really.

Along with Jessica, he tries to get out of town and find the Sanctuary. Meanwhile, his partner (and ex-friend) Francis, pursues him as if he were just another runner.

After many adventures, Logan and Jessica reach the outskirts of the city. There they find the ruins of the ancient world and also discover elderly people, finding out for the first time in their lives, what an elderly person looks like.

These people remember the past and tell them what happened to humanity. Thus, Logan discovers that he has only lived a third of his life and understands that the computers government is really a dictatorship, which must be stopped. Will he succeed in ending that regime? You’ll have to watch it to find out.

After the success of the film, a series of 14 episodes was produced. The plot of the series was different from the novel and the film, but the concept and costumes were similar. The series, however, was not successful and was canceled before airing the last 3 episodes.

I’ll never forget the Simpsons scene where a hostess at an event for young people has one of those watches in the palm of her hand. The device begins to flicker and she is immediately replaced by a younger girl.

Here is the movie trailer: