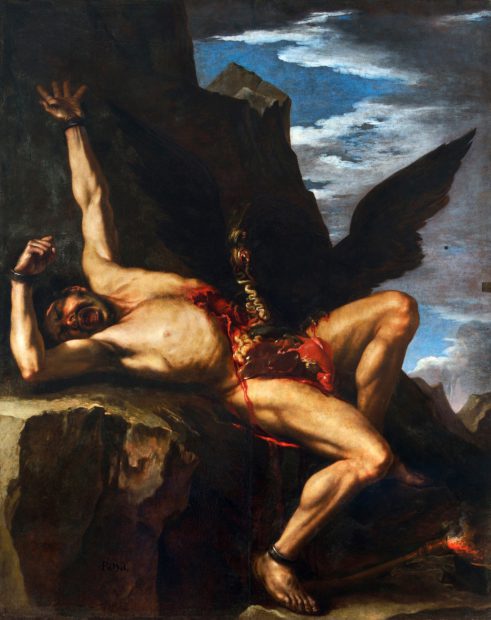 Since this post had many views, I have decided to add extra content to it. Continuing with the origin stories, this time I will focus on the myth of the creation of man in Greek mythology.

An earth that was… Empty?

At first, the gods ruled a world inhabited only by plants and animals. This is where a titan named Prometheus, son of Iapetus, comes into play. His mother was Asia in some versions and Climene in others.

One day, Prometheus realized that the existence of other creatures was necessary. He imagined them with two arms, two legs, a broad forehead, walking upright, with a spark of intelligence in their eyes and, most important of all, little hair (having a lot of hair was unhygienic). Thus, he spent several nights dreaming of those creatures from his imagination.

Once he had a clear image in his head, he decided to mold them with a mixture of clay and fire. He imagined that these creatures would be eternally grateful to him for creating them. Thus, he spent several days, in the darkness of a cave, molding his creations.

Let’s get to work

The first statuettes came out very rough, but as he practiced, they came out more similar to the image in his head. Thus, he left his first attempts in the back of the cave and in front of them, the best versions.

One day, his brother Epimetheus entered the cave, saw the statues and warned him that Zeus would be angry if he ever found out. He was right: When the king of the gods learned what Prometheus had done, he felt a lot of jealousy and rage.

Zeus ordered Prometheus to get rid of the figures. But Prometheus, in an obvious manipulative attempt, asked him to keep them for the glory of the gods. Anyway, Zeus failed to sense the Titan’s intentions and, basically, fell into the trap and agreed. But he gave Prometheus and Epimetheus one night to assign to those creatures whatever gifts they deemed appropriate. After that time, he would give them life, no matter how they were.

I’ll take care of everything

Epimetheus asked his brother to let him take care of the matter and go to rest. Prometheus agreed, but he would regret it. Because the next morning, he saw with horror, that his brother had started with the figures in the back, the imperfect ones, and had not had time to assign any gift to the more stylized ones.

Even worse, he had given the figures in the back claws, fangs, lots of hair, and many other abilities that would give them an advantage. Meanwhile, the more stylized figures remained naked, barefoot and unprotected.

But not everything was negative: the more stylized figures were beautiful and had a particular sparkle in their eyes. Would that be enough? They would not have time to find out: A ray of light entered the cavern. It was the light of life. Prometheus’s eyes filled with tears: the time of men had come. However, so had the time of beasts.

The fate of Prometheus

But Prometheus’s tricks to the gods did not end there. He also devised a plan that consisted of making a sacrifice of a great ox. He divided the ox into two parts: in one he put the skin, the meat and the entrails, and in the other he put the bones, but covered them with fat. Then he let Zeus choose the portion the gods would eat. Zeus chose the layer of fat and got angry when he learned that underneath, there were only bones. Since then men burn the bones in their sacrifices and eat the meat.

But Zeus took revenge for that deception and forbade fire to men. So Prometheus decided to steal it. He ascended mount Olympus, took it from the chariot of Helios (or the forge of Hephaestus in other versions) and carried it back to men on the stem of a reed (which burns slowly). Since then, in many periods of history, humanity saw Prometheus sometimes as its protector and the protector of civilization, sometimes as a rebel who sought to equalize humans with gods and sometimes as the thief of human innocence that only brought suffering to the world.

In response to this new audacity, Zeus took revenge, by ordering the other gods to take Prometheus to the Caucasus. There, Hephaestus chained him with the help of Bía and Kratos (Is he the same Kratos from the video game? If anyone knows, leave a comment). So Zeus sent an eagle, wich was the daughter of Typhon and Echidna, to eat Prometheus’ liver. But since Prometheus was immortal, his liver would grow back and the eagle would eat it again every morning, repeating the cycle over and over again, for all eternity, or so it seemed.

Hercules to the rescue

Much later, when Hercules was on his way to the garden of the Hesperides, he passed by the place where Prometheus suffered his punishment, and shot an arrow at the eagle. This time, Zeus allowed his son’s intervention, basically, because he was his son.

Thus, Hercules freed Prometheus, although the titan had to wear the shackles on his wrists forever. But anyway, Prometheus was grateful and, for that reason, he revealed to Hercules how to obtain the golden apples from the Hesperides.

Hercules had many adventures like these. Someday I will dedicate a whole post to his adventures. For now, you can find a post where I talk about his ridiculous death here.