Working on The Sequel: First Sketches 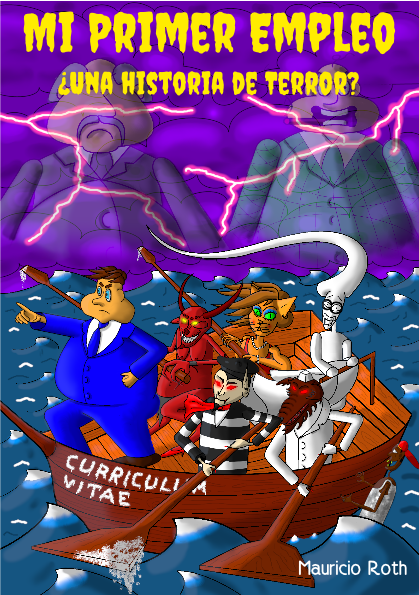 Working on the sequel: character sketches

I’m now working on the second part of “My First Job”. Here, I want to share some character sketches, that show a new character and some changes in the appearance of some of the older ones. If you don’t quite kown what I’m talking about, check the first part.

She is Brunhilda: A brave little witch, with a lot of character, who will be helping Venicio in his new adventures.

This would be a first sketch of how she would look like.

For the sequel, I made some small changes to it. I swapped its sawtooth smile for a more ghastly one to make it look scarier.

With that same premise in mind, I highlighted the ribs, added some bony protrusions on the shoulders and on the spine.

I also twisted the horns, added some pretty topknot to the shoes and replaced the ragged loincloth with another made of bones.

To give it a rock attitude, I studded the bracelets and added some pretty tattoos on the arms. This would be the sketch of how it would look like.

In early drafts he looked a lot like Dracula and some beta readers mistook him for that character. An emergency wardrobe change had to be made to give him a more French look. But I was not fully satisfied with the result.

So, for the sequel, I have decided to practically redraw him from scratch, already with the typical costumes included and some changes to his features to give him a more personal vision of what a vampire would look like. This time he is much slimmer, with a more modern hairstyle, bulging eyes and ears in the shape of bat wings.

This is a sketch of how he would look like.

For the sequel, I have decided to polish her image a bit. I came up with a look halfway between a prostitute and a sailor scout: I changed her red high heels for long boots, added a plaid design and a topknot to her skirt, a floral design on the brassiere, a pendant on her necklace , tattoos on her arms and a flower in her (now longer) hair.

This would be a sketch of how she would look like.

Continuing with the idea of ​​the topknot , I also added some details to her outfit:

A bulge at the shoulders, pleats at the neck, waist and hat, tighter sleeves that end in a semi-transparent fabric covering the hands.

It is no longer a plain and flat sheet, but she still looks like a ghost. This is a sketch of how she would look like

In this case, I kept more or less, the same figure, but made it stronger and more deformed.

I also changed the color of his hair to a more bluish one, tore his clothes more (before, he only had torn gloves) and added the logo from the fast-food where he works.

This would be a sketch of how he would look like.

And that’s all for now. Theese images will be modeled in 3D. I’ll share some renders soon. So, stay tunned.