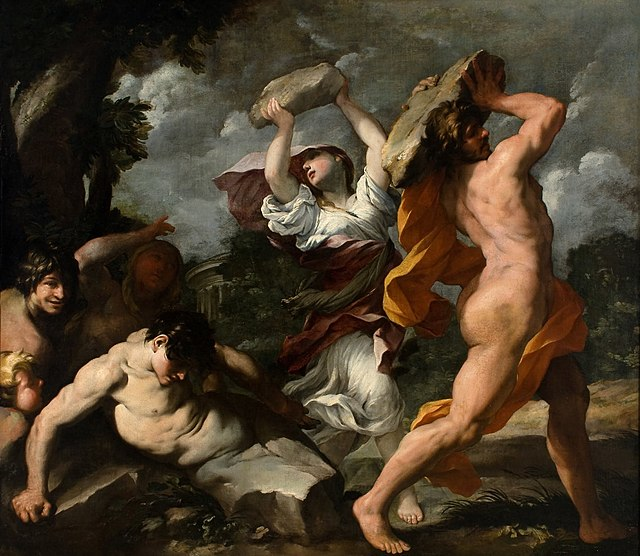 We all know the biblical story of the universal flood. What not everyone knows is that you can find this same story in several older cultures. There is a Greek and an older version: Utnapishtin’s tale from Gilgamesh’s poem. And since this blog is not about the bible, I will just tell the Greek version.

One day Zeus visited the court of King Lycaon in Arcadia and was greatly disappointed about mankind. So he decided, just like that, to put an end to the Bronze Age.

He first thought of sending tongues of fire to earth, but he feared that the flames might reach Olympus. So he changed his mind and decided to send strong thunderstorms, which flooded most of Hellas. Most of men perished. Only a few took refuge high up in the mountains.

The hero enters the scene

Deucalion was the son of Prometheus and one of the Oceanids (depending on the version, Pronea, Hesione or Clímene). He was king in the regions near Phthia. His wife was Pyrrha, daughter of Epimetheus and Pandora.

Somehow, Zeus’s plan reached Prometheus’ ears. The titan warned Deucalion and Pyrrha to build a ship to shelter from the storm. In this version, they mention no animals.

The ship withstood the deluge for nine days and nine nights, and finally got stranded on top of a mountain (depending on the version, Parnassus, Etna, Athos or Othrys). So Deucalion and Pyrrha returned to the land and found it completely desolate.

For some reason, they decided to make a sacrifice in honor of Zeus Fixius and then consulted the oracle of Delphi, which at that time belonged to the goddess Themis (later she left it to Apollo), on how to repopulate the earth. They found the roof of the temple covered with seaweed and a cold altar.

Dear oracle! I can’t understand you!

The oracle’s response, as usual, was cryptic: It told them to throw their mother’s bones over their shoulders. At first they did not understand the answer. Even Pyrrha thought that she would have to desecrate Pandora’s body. But after thinking about it for a while, they concluded that the oracle was referring to the great mother: Gea. Her bones, therefore, would be the stones.

Thus, they covered their heads and untied their belts, as a sign of respect, and began to walk, picking up stones from the ground and throwing them over their shoulders.

The stones thrown by Deucalion became men and those thrown by Pyrrha became women. In this way, humanity was reborn and that is why the words people and stone have been pronounced very similarly in many languages ​​since ancient times.

Meanwhile, once the earth dried up, Gaia made the plants sprout again. Once there were plants again, animals began to appear as well. The Iron Age had begun!