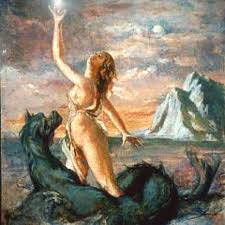 What a better way to start my blog than with a story about an origin? And since there are many fans of Greek mythology, the choice was very obvious. So here we go:

In the beginning, there was only a great void: Darkness and nothingness covered everything. But one day the void got bored of being… just a void, and spawned something. Something that nobody knows for sure what it was, but that everyone agreed to call “Chaos”.

Yes, I know what you are thinking. Do not say it. No. I said no! He is not the Christian god. Please! We are talking about a totally different culture!

Very well, that point being clarified, let’s continue. Eurinome must have felt very uncomfortable being naked and floating in the middle of nowhere, so she decided to put a some order in the whole matter: She drew a line with her index finger, just below her feet and, with this action, she separated two different realities: The sky and the sea.

She must have felt very satisfied with the task, because she just started to dance, right there. She went round and round (and she didn’t get dizzy). But something went wrong: The waters were churning under her feet. But then she realized that she could also move. So she decided to head south. And where was the south? Well, wherever she wanted. After all, she was a goddess!

And from so much kneading Boreas, whose consent wasn’t even asked in the whole matter, she ended up creating a snake. But it was not like any other snake. This snake was a mle (a fact that will become important in a moment). His name was Ophion. Eurynome continued dancing as if nothing had happened. It seems that Ophion liked the idea of the dance, because he began to wrap himself around the goddess, and dance with her. Scholars are not quite sure how it happened, but at some point, from that primordial dance, things went very porn. Because almost instantly, our goddess became pregnant.

By this moment, poor Boreas had run away (or may be he flew, it is not known) just in case he would end up pregnant too. So we won’t hear about him again, for now.

Going back with Eurinome, she did not find it appropriate for a goddess to continue her pregnancy in human form and, right there, she transformed into a dove.

She settled delicately on the waters and laid a silver egg: The universal egg.

At this point, Ophion’s parental instinct was awakened and he curled around the egg. In some versions he turned seven times around it, in others twenty. The thing is, that he hatched the egg and, after a while, the egg broke in half and, from it, everything else emerged: the earth, the moon, the sun, the planets and, of course, the other gods.

One of the gods in particular, the god Eros (better known as Cupid) is said to have set the entire universe in motion. But it was a double-edged sword, because with his arrows he made anyone fall in love with anyone. Many times they were not loved back. Already at that time the issue was a motive of concern.

In other versions, Eurynome was the daughter of Tethys and Oceanus.

A marriage destined to fail

After celebrating the miracles of creation, Eurynome and Ophion went to live on Mount Olympus. But soon after that, the friction began. Ophion had no better idea than to proclaim himself as the true creator of the universe.

Eurynome, as an empowered feminist that she was (I mean, she created an entire universe. what more could you ask for?) Stomped on his head with her heel, pulled out his teeth and threw him into Tartarus.

Her relationship with Zeus

The Greeks, in their quest to legitimize the power of Zeus as king of the gods, tried to relate him to everything, even at the cost of creating plot inconsistencies like the one I am about to relate.
Zeus saw her, there, in the origin of the universe, dancing very happily, and fell in love with her beauty and her glory. Such was his… feeling, so to speak, that he did not even care that the woman was already busy with Ophion and, without even asking if they was in the mood for a threesome, he took Eurynome and… you know. Eurynome got pregnant (yes, again) and from that relation, the three graces were born: Aglaya, Eufrosine and Talia.

And no, she is not this Talía. her surname is spelled differently: